Tokimatsu Tairei | We deliver traditional pottery art of Japan to the world! (currency is the U.S.$) 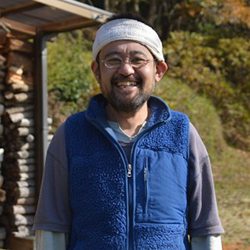 Tokimatsu liked making objects since when he was a boy. Without any doubts in his mind, he entered a university to study arts. While learning about arts, Tokimatsu became more interested in “earth”. Since then, he pursued the way of Togei (the Japanese art of pottery) and migrated to Hagi City in Yamaguchi Prefecture, the home of Hagi ware.
Tokimatsu is especially particular about “form” of his work. In honest and direct way, Tokimatsu reflects his sensitivity in his work.

“I decided to pursue the way of Tougei because I liked earth. It is still the blissful moments for me when I am handling earth. Creating a form, adjusting and baking it in a kiln. There are some sounds coming from inside of the kiln while potteries are baked. It is the sound that drives away evil thoughts and doubts. This sound is what I call “the whisper of angels”
My works are different from the mass produced Hagi dishes, cups and bowls. I hope that people would enjoy each Hagi ware for its own uniqueness. It is my wish that people would use my potteries in their everyday life.”

1994 He graduated from Kobe Design University majoring in the product course of industrial design.
1995 He studied Tougei (the Japanese art of pottery) in Yamaguchi College of Arts as an auditor.
1996 He became a disciple of Ryuji Matsuno in the Hagiyaki Ryokuei Kiln.
2000 He settled in Mine City, Yamaguchi Prefecture and opened his own pottery kiln.
2009 He had an exhibition at Tortoise in LA, USA.
He held a workshop seminar in Xiem-CLAY CENTER in LA, USA.