Kohei Tanaka | We deliver traditional pottery art of Japan to the world! (currency is the U.S.$) 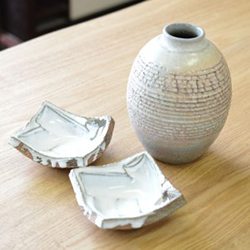 Since 1988, Tanaka began making Tobe ceramics in his birthplace of Tobe Town, Ehime Prefecture. Tanaka chose Yamaguchi Prefecture as his training site. Later he became fascinated by Hagi ware and also liked living in Yamaguchi Prefecture. In 2001, he became an independent artist and opened a kiln in Yamaguchi City. 砥Back in Tobe Town, Tanaka used to make celadon porcelain ware by using a technique called Kushime Retsumon (櫛目裂文). He had incorporated his old techniques into making Hagi ware of his own style.
“When I decided to pursue the way of Togei (the Japanese art of pottery), I was already a 36 years old. I could not have made the resolution without my family’s understanding and support. Because of my situation, I am always very serious about my work.
If I am not impressed by my work, neither do others. I believe that people relate their emotions even if it is just a simple pottery. Just like my predecessors, I would always like to have an inquiring mind towards my work, no matter how old I become.”