Touri Yoshino | We deliver traditional pottery art of Japan to the world! (currency is the U.S.$) 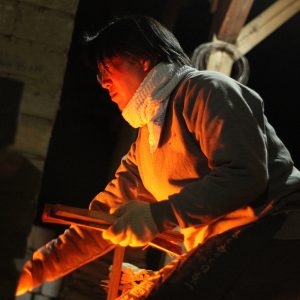 In order to pursue his ambition for becoming a potter who is specialized in making tea ware, Yoshino trained under the 12th generation of Saka Kouraizaemon. After his training years, Yoshino became an independent artist and started a Hagi ware kiln named “Touri”.
Touri kiln is located close to the land where Naganobori copper mine used to be. This old mine is a historical place that its copper was transported to Nara Prefecture to build the colossal Buddha statue of Todai temple. Saka family, the family that Yoshino trained under, was also involved in the process of making the Buddha.

Saka family is the descendant of Rikei, a Korean potter who was brought to Japan by Lord Terumoto Mouri in the time of Korean invasion commanded by General Hideyoshi Toyotomi. Since the early 16th century, Saka family served to Lord Mouri and played an important role in establishing the tradition of tea ware culture. The name of Touri kiln originates from the ancestor of Saka family, Rikei. The word “Ri(桃)” is used as in “Touri”.
Ri means plum so that Yoshino planted plum trees around the kiln. His plum trees also symbolize the Chinese proverb “a plum tree does not speak for itself. However its fragrance attracts people. These people would naturally create a way under the tree. ”

“I try not to forget my first resolution for becoming a Hagi ware artist. From the process of making the soil to baking the wares, I keep paying attention to every detail. I was fortunate to receive a chance to learn about traditional techniques from Saka family. I would like my senses to be always keen about the change of seasons. Let the fire handle the baking, I want to be diligent in my work and to improve my skill.”

1965 He was born in Fukuoka Prefecture
1986 He graduated from Arita College of Ceramics.
1986 He became a disciple of the 12th generation of Saka Kouraizaemon.
1996 He became an independent Hagi artist.
2000 He held an exhibition for the first time at Shibuya Toukyu department store. After that he had a numerous exhibitions and group exhibitions in all over Japan.
2001 His work was accepted in the Exhibition of Tradiitonal Art Crafts of Seibu Area in Japan. (Accepted later 7 times in total)
2007 He received the Association of Hagi Ware Artists Award in the Exhibition for the Association of Hagi Ware Artists.